Oh no: more blather from a po-biz whore
Who thinks his leftist twitches truly matter!
Respect the silence, punk, a little more.

I posted simple common sense. Therefore,
My fate was sealed. My brief peace had to shatter.
Oh, no: more blather from a po-biz whore

Who’s twice-recycled urine at his core,
Who lacks a heart and substitutes his bladder!
Respect the silence, punk, a little more—

And spare us all the piss you have in store.
Tweets or restraint? I urge you: choose the latter!
Oh, no: more blather from a po-biz whore

Who hopes that lies and ignorance can score!
His vile critiques, you’ll find, could not fall flatter.
Respect the silence, punk, a little more.

No triumph when your knees are on the floor.
I’m sneering at your half-considered patter.
Oh, no: more blather from a po-biz whore!
Respect the silence, punk, a little more. 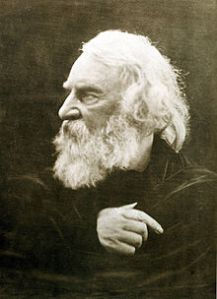 (Poor Longfellow! His good name has been inherited by a semiliterate punk!)

A Note on the Text

A black gal who’s totally MAGA and who has a large Twitter following occasionally posts political satires from this blog. Her handle is @iMSmedley. I myself don’t tweet, so, if my stuff finds its way into the Twitterverse, @iMSmedley is probably responsible.

On Feb. 7th, she posted this little limerick about a gutless bishop:

The mob raged at the horrible sin
Of a smile. What a foul racist grin!
“Facts be damned! We judge quick!
Pro-life kids make us sick!”
And the pro-life kids’ bishop joined in.

Then she received the following comment from a leftist po-biz type, who presumed to analyze my scansion and rhyme:

Look at how much more closely this limerick I wrote adheres to convention:

Limerick for “Base Mom”

Let’s pretend that Hitler’s a Leninist
And Christina Hoff Sommers a feminist,
Then pretend that it’s classy
She defends Joseph Massey
And not say that she’s really a meninist.

All this reminds me of the sage words spoken by Douglas M. Levison to a neophyte trumpet player: “An artist respects the silence. It serves as the foundation of creativity.”

To which the proper immediate response was, of course, “What is this idiot talking about?”

Unfortunately, although Johnny can read – somewhat – he apparently can’t see that anapestic trimeter, trimeter, dimeter, dimeter, and trimeter are precisely what “Bishop of Covington” delivers on the old metrical level.

What syllables are accented in line two? SMILE, FOUL, and GRIN: every third syllable again!

Johnny Longfellow may object here that I have not listed all the accented syllables. On this point, he would be right – but he’d be wrong in thinking that it makes any difference. The syllables in the whole limerick that receive an accent where none is required by the meter are MOB, the first syllable of RACIST, FACTS, JUDGE, both syllables of PRO-LIFE in line four, the second syllable of PRO-LIFE in line five, KIDS in line five, and JOINED. That’s a lot of extra accents! Isn’t it really a problem?

No, it’s really not. In practical terms, you won’t find any limerick anywhere that leaves all those syllabic places unaccented. As long as you have accents where they’re needed, everything’s fine. (This is a general rule of English scansion, not limited to the limerick.)

Here’s a classic by James Joyce:

There’s a ponderous pundit MacHugh
Who wears goggles of ebony hue.
As he mostly sees double
To wear them why trouble?
I can’t see the Joe Miller. Can you?

Is some creature named Johnny Longfellow going to tell James Joyce that his meter is way off?

Johnny’s comment on the rhyme is even dumber. Line five of “Bishop of Covington” ends in a feminine rhyme? How’s that? SIN rhymes with GRIN rhymes with IN. Those are all masculine rhymes and they’re all absolutely exact.

Here’s what Johnny’s little brain may be thinking as it floats in its urinary bath. He may be thinking that IN fails to receive an accent. Even if that were the case – and it’s not – it wouldn’t mean you were dealing with a feminine rhyme. It would mean that line five didn’t rhyme at all. But this delusion about feminine rhyme may be what the confused Johnny is thinking.

If you’re a native speaker of English, or if you have achieved native proficiency, say the following sentence aloud: “Am I just going to watch, or am I allowed to join in?” If you don’t give the final word IN a pronounced accent, you need further English lessons.

Checkmate, Johnny. You’ve been bitch-slapped all the way back to the People’s Republic of Massachusetts. But in case you still don’t get it, which seems highly likely, here’s a little tour de force – a limerick which also features the line-final words JOINED IN, but in which the meaning of this phrase is different, so that the accentual pattern is different, too:

Bitch of a Wedding

Here’s the chapel the couple was joined in—
The fine place that their free vows were coined in.
But the poor bride was heading
For a bitch of a wedding:
Here’s the room that her ring was purloined in!

You see? You see, Johnny? Accent depends on meaning – and, according to the meaning, the IN at the end of “Bishop of Covington” does receive an accent. It has to.

First of all, it seems to have been written in July of 2018, which is when Joseph Massey was in need of a defense after standard #MeToo charges. Really, Johnny? All the way back in July? I wrote six limericks yesterday, twelve the day before, and a bunch the day before that and the day before that. You are not practicing the art very assiduously.

Here’s Johnny’s limerick again – so you, the poor, put-upon reader, don’t have to look back:

Limerick for “Base Mom”

Let’s pretend that Hitler’s a Leninist
And Christina Hoff Sommers a feminist,
Then pretend that it’s classy
She defends Joseph Massey
And not say that she’s really a meninist.

How does line one scan? Well, according to Johnny’s made up rules, it starts out very badly, since LET’S has to get an accent, which (again, according to Johnny) would spoil the perfection of the anapest. According to the actual rules, the first foot is fine. But the second foot is a violation of the meter. Since the first foot ends with the accent on the second syllable of PRETEND, the second foot must begin with THAT – but the first syllable of HITLER is the one that gets the accent. Ouch! Johnny has substituted an iamb for the required anapest!

This is a serious no-no. Folk limericks frequently allow iambic substitution in line-initial position – and James Joyce allows himself one in line four above. But the limerick does not admit of substitutions in line-medial or line-terminal position. Johnny’s limerick actually cheats!

How about Johnny’s rhymes?

LENINIST and MENINIST do rhyme – but using MENINIST as the final rhyme is a cheap trick because MENINIST is a word coined in imitation of the word FEMINIST. I wouldn’t exactly call this cheating – but Johnny’s reaching here. He’s really reaching. It’s clear that he’s not comfortable with the limerick form. He writes limericks the way a chimpanzee plays chess.

As the reader has no doubt already figured out, Johnny Longfellow’s final comment constitutes the true explanation for the whole series. He didn’t in fact perceive any flaws in scansion or rhyme. He took umbrage at the poem’s attitude toward the Covington Catholic kids and made up the rest of his performance, confident that his status in the insulated world of po biz would stand him in good stead. Alas, he only managed to make a fool of himself!

He’s made a fool of himself with his own stance toward the Covington Catholic kids, too. The Diocese of Covington is no longer threatening dire consequences to kids who smile while white. The bishop is furiously backpedaling. It is he, not Nick Sandmann, who faces consequences. Soon, very soon, he will be sued for defamation of a minor. Considering the video evidence and the reality that trial will take place in Kentucky, the bishop is sure to lose. Elder Nate Phillips, that scrawny old liar, is going to face the same fate.

I sure hope Sandmann’s lawyers go after the Indigenous People’s March – whose GoFundMe account raised money from Elder Nate’s slanders. Clean those grifters out and put them out of business!

Yes, I am looking forward to that!

Andrew Cuomo rejoiced. Ain’t that swell?
With a pink light he ventured to tell
How he loved baby-killing.
Will it still be as thrilling
When he joins up with daddy in Hell?