The Red Wave didn’t happen. No surprise
To me. It was a prophecy too good
For zombies such as us to realize.
We ain’t in no triumphant neighborhood.
Progressives cheated, sure. We knew they would.
But did they need to cheat to hold at bay
The promised wave? As if mere cheating could!
Truth is that cheating’s just the game they play.
They have to keep in practice. But today
It’s clear, if it was not quite clear before,
That, ever since the Blue Boys beat the Gray,
This country’s been an unrepentant whore.
Since then, there never has been power to save
In any damn imaginary wave.

They tried to push a leftist Rush for years.
They propped up every kind of idiot
They could imagine. Didn’t help one bit:
All efforts led to failure – and to tears.
In calculating skulls, the latest gears
Were turning, lubed with thick progressive spit.
The end result was always simply shit.
Impotently, the Left shook plastic spears.
That’s why they had to get their insults in
When cancer slammed the door on Rush’s reign.
Awash in imbecility and sin,
In agony from self-inflicted pain,
They knew Rush played a game they couldn’t win—
Wherever he might tie one-half his brain.

That fat fraud Shea is at it once again.
What is he up to? Well, of course he’s lying.
He earns from sycophants a swift amen.
He finds the praise of morons gratifying.
Truly engage his brain? He isn’t trying.
It’s all progressive reflex, leftist twitch.
You might conclude that he were daily dying
To be, say, hag Pelosi’s strap-on bitch.
But you’d be wrong. When he adores that witch
Or sticks his busy tongue up Biden’s ass,
He isn’t scratching any inner itch.
Rather, it’s like his posturing at Mass.
He just thinks it’ll pay the bills to do it.
He’s vacuous inside – except for suet.

Rush Limbaugh’s dead – and how they’re celebrating,
The pederasts and parasites online!
“Rest in piss” is the phrase that’s circulating.
Some halfwit with a tapeworm for a spine
Came up with that – and others found it fine.
The thought crimes Rush committed were that vicious.
He spoiled the Ministry of Truth’s design
By telling truths that stunned the meretricious.
News of his death to many is delicious.
They savor it like condom flavoring.
Their curses are absurdly superstitious—
But will not cease. O Death, where is thy sting?
Are leftist assholes partying? Why, yes—
But that, Rush, is the proof of your success. 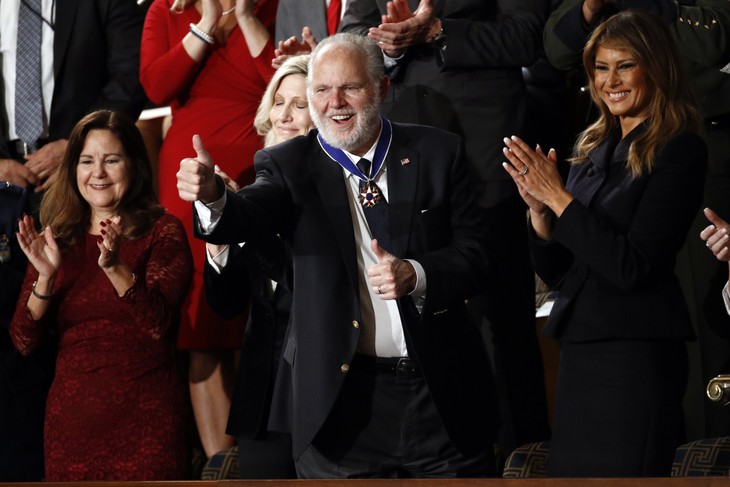